Microsoft Edge is borrowing one of Chrome’s best features Microsoft’s Chromium-based Edge browser is often described as a faster and less resource-demanding alternative to the competition from Google and co. But while it beats Chrome in some key metrics, it long lacked some features that Chrome users take for granted. Microsoft is closing one of these gaps with the latest update to the browser on Windows. As spotted by Windows Latest, it’s now possible to send tabs from one device to another, just like you can on Chrome.


Microsoft rolled out support for tab syncing and cross-device history earlier, which allows you to see a list of tabs you’ve opened on other devices, but the new tab sending feature might be more useful if you quickly want to send just one particular website from your computer to your phone or vice versa. Much like Chrome’s Send to your devices feature, Edge lets you quickly push an open web page or link to another device, without having to find it among your plethora of open tabs.

It looks like Microsoft has just started the rollout, as the feature is currently only available for a small subset of users using the latest version of Edge for Windows, v91.0.864.54 — on Android, you still need to install the beta (APK Mirror) to get the feature to work as of now. 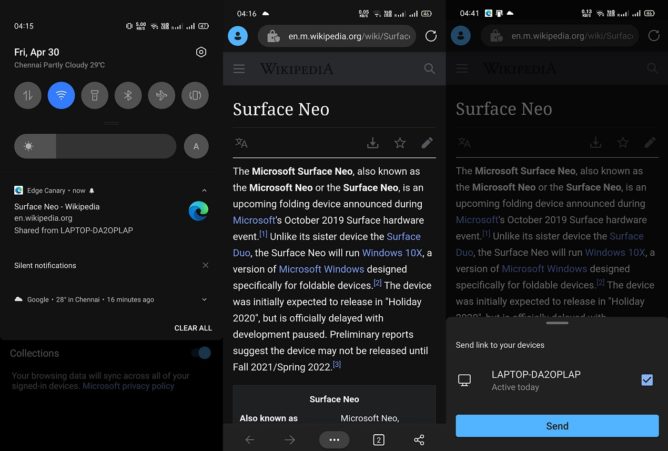 If tab sharing is live for you, you can click the address bar in the desktop version and then look for the icon depicting a phone and a laptop, which allows you to select your phone as the sharing target. Alternatively, you can right-click any link to send it. In Edge beta on your phone, you can achieve the same by tapping the share button in the overflow menu.

The feature is rolling out following an extensive beta testing period that started in late April with Edge Canary version 92, and it’s possible that we’ll only see the full rollout once Edge hits stable version 92.

Rolling out for the first few users in stable

Article updated to reflect that tab sharing is now rolling out to the first few users on the stable Edge version.

Motorola Edge S Pro moniker has been confirmed through a promotional video shared by the company on Chinese microblogging website Weibo. The...
Read more
Android

Over the weekend, Nest Thermostat owners using the Nest app have reported that Energy History is missing. This widespread issue comes as that...
Read more
iPhone

Chrome for Android becoming a 2FA security key for Google

For the past few years, Google has aggressively encouraged adoption of two-factor authentication (2FA) — or 2-Step Verification (2SV) as the company refers...
Read more

However, this may not matter. A study conducted by scientists from Israel's Tel Aviv University found that even in urban areas such as...
Read more
News

In India, Realme - with a 14.6 per cent market share in the June 2021 quarter.Realme is among the top four smartphone brands...
Read more
How To

Rainbow Six Siege developers at Ubisoft seem to be teasing an upcoming event on the Consulate map. From what we have seen so...
Read more
Gadgets