You should always have a few specific devices in every car you drive. One of those things is an emergency jump starter. No matter what kind of car you drive, you never know when you’ll run into an emergency and need a quick burst of juice to get moving again. Grab the Tacklife T8 800A Peak 18000mAh car jump starter while it’s on sale for $55.99. Use code 4FLO4P65 during checkout to get it that low. The code takes 30% off the top of the jump starter’s regular $80 price. The Tacklife T8 is a newly updated version of one of Tacklife’s most popular jump starters, and this price is one of the best we’ve ever seen. 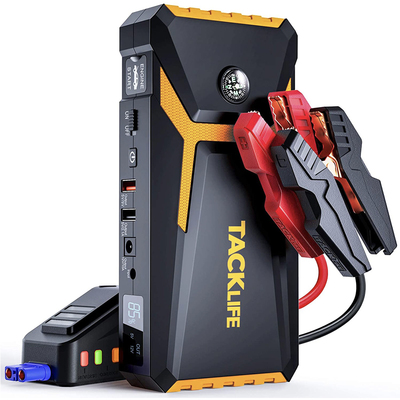 Works on most cars, SUVs, trucks, and more. Can jump start up to 30 times on a single charge. Charge mobile devices with two USB ports and an 18000mAh capacity. Even has Quick Charge and a built-in LED flashlight. Covered by a two-year warranty.

The T8 has 800 amps at peak current, and it’s powerful enough to work on a variety of vehicles including 12V cars, SUVs, trucks, vans, and more. When it’s fully charged it can provide up to 30 jump starts. Hopefully you won’t need that many!

The T8 will also hold its charge for up to a year when not in use. That’s useful because it means you can charge it and then set it aside until you really need it. When your car breaks down a few months out, you won’t be caught with a dead battery and a dead jump starter. Just manually use the Off mode to slow down the battery’s self-discharge and turn it back to On when you want to use it.


In addition to the jump starter, it also doubles as an 18000mAh power bank. The device has two USB ports, one of which is equipped with Quick Charge technology. Whether you can take advantage of that fast charging tech or not, you’ll still be able to recharge a lot of your devices with a battery that large. Other car accessories can also be recharged using the DC port.

On the front is a powerful LED that can work as an emergency flashlight. Use the Red light to function as a traffic warning signal. You can also switch between a Strobe or SOS signal. Other features include a built-in compass and an LCD screen that displays the remaining battery life.

Tacklife covers the T8 with a two-year warranty.

Have you listened to this week’s Android Central Podcast?

Every week, the Android Central Podcast brings you the latest tech news, analysis and hot takes, with familiar co-hosts and special guests.

Samsung Galaxy Z Flip 3: everything we know so far

In this article, we’ve combined all of the leaks and rumors to help you find out what to expect from the upcoming Samsung...
Read more
Android

Google Workspace users can now use Assistant on Nest Hub

Back in March, Google made Assistant generally available for all enterprise accounts on Android. Workspace users will soon be able to use Google...
Read more
iPhone

Apple’s mobile web browser is the main lightning rod of this year’s iOS 15 beta period and it remains to be seen whether...
Read more