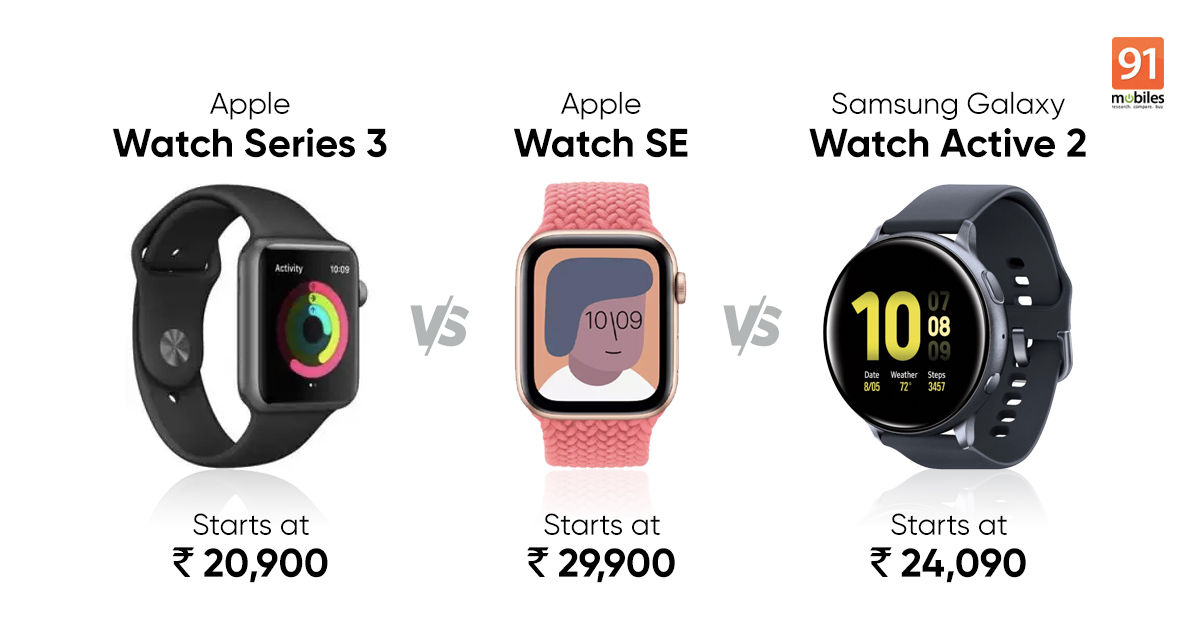 Apple Watch SE was launched at Apple’s ‘Time Flies’ event on Tuesday. It’s the first-ever non-flagship smartwatch from the Cupertino-based company that targets consumers shopping in the mid-range section. The Apple Watch SE shares some features of the new flagship Apple Watch Series 6, including the display, built-in accelerometer, gyroscope, altimeter, and fall detection. It will also get features like sleep tracking and handwash notification with the watchOS 7 update. The Watch SE succeeds the three-year-old Apple Watch Series 3, which will not be discontinued and will continue to sell in India and other markets at a budget price. We decided to compare the price and features of the two Apple smartwatches along with another rival under Rs 30,000, the Samsung Galaxy Watch Active2.

The Samsung Galaxy Watch Active2 price in India is Rs 24,090 for the Bluetooth Aluminium option, while the 4G Aluminium model will set you back to Rs 28,490. There is a steel variant of the watch as well, which starts at Rs 32,490.

While Samsung Galaxy Watch Active2 and Watch Series 3 are available for sale, Apple is yet to announce the availability of the Apple Watch SE in India.

As for the Samsung Galaxy Watch Active2, the wearable touts a circular design with the power button and back button on the right spine and speaker grilles on the right. The watch is accompanied by leather and silicone strap options. It measures 35mm (1.4-inch) in size.

The Apple Watch SE features an OLED Retina display, which is 30 percent bigger than the one on the Series 3. The wearable is powered by the S5 chip, the same chip found in the Apple Watch Series 5, and comes with an always-on altimeter, motion sensors, and microphones. The Watch SE also has support for fall detection, Emergency SOS, noise monitoring, sleep tracking, Walkie-Talkie function, Siri, and handwashing detection, much like Series 5 and Series 6. Buyers can choose between GPS-only and GPS + Cellular variants. Moreover, it has Apple’s new Family Setup, which allows parents to set up and manage Apple Watches for their kids, including features like message monitoring and location alerts.

The Apple Watch SE runs watchOS 7 out of the box with seven new watch faces. There are optical heart rate sensor, 32GB storage, up to 18-hour battery life, and irregular heart rate notifications are also onboard.

The Apple Watch Series 3 has similar battery life; however, it’s powered by a slightly slower S3 chip. The smartwatch too has a biometric altimeter for measuring altitude but not in real-time. The watch also misses out on important features like LTE, fall detection, noise monitoring, and haptic feedback. The wearable supports watchOS 7, which means it should get the new sleep app and tracking features as well.

The Samsung Galaxy Watch Active2, on the other hand, has a Super AMOLED with 360×360 pixels resolution and haptic feedback. It supports always-on display which is missing on the two Apple Watch models. Under the hood, the Active2 4G rocks heart rate monitor and accelerometer, ECG sensor, gyroscope, barometer, and ambient light sensor. The wearable is claimed to track 39 different workouts, and seven of them are automatically activated, including running, walking, cycling, swimming, rowing machine, elliptical machine, and dynamic workouts. Other features include e-SIM for 4G connectivity, a 340mAh battery, 1.5GB RAM, 4GB storage, IP68 and MIL-STD-810G certification for extreme durability, and Tizen OS to take care of the software side of things. The wearable is compatible with both Android 5.0 or above and iOS 9.0 or higher devices.

Apple Watch SE does seem a solid upgrade over Apple Watch Series 3, at least on paper. The wearable, though more expensive, gets a better chipset, bigger screen size, and a bunch of additional features such as LTE, fall detection, noise monitoring, and more. However, the Apple Watch Series 3 seems to be a decent choice for those looking for an affordable Apple smartwatch. The watch is still getting software updates from Apple and will receive watchOS 7 today.