Use a 1970s Xerox Alto in Your Browser

In 1973, Xerox introduced the Alto, a pioneering research computer that set the stage for the modern PC with use of a bitmapped graphical interface, a mouse, and local networking. Thanks to an emulator, you can simulate an Alto in your browser. But first, let’s look at why the Alto was special.


The Alto’s bitmapped display and paper-white portrait monitor made it an ideal platform for innovations in computer document preparation, including the first WYSIWYG (“what you see is what you get”) word processors that supported multiple fonts. It also hosted early drawing programs and font editors that would later revolutionize publishing.


While Xerox was slow to capitalize on the stunning inventions embodied in the Alto, it wasn’t shy about showing them off. Many researchers in the 1970s at universities (and visitors from other companies) used Alto units, and the computer inspired the creation of many early single-user graphical workstations. And in a 1979 commercial, Xerox touted the capabilities of the Alto, including email and networked printing, to the public.

Most famously, Steve Jobs visited Xerox PARC in 1979 and came away convinced that Xerox held the key to the future of personal computing. That inspiration led to the release of the Apple Lisa in 1983 and the Macintosh the following year.

Over less than a decade, Xerox produced over 2000 Alto units in two models (Alto I and Alto II), but the computer was never officially on sale. Aside from its internal use within Xerox, Xerox donated 50 units to universities around the US in 1979, and several were in use in the White House during Jimmy Carter’s administration.

RELATED: The Foundation of the Internet: TCP/IP Turns 40

Considering its development in 1972, it’s no surprise that the Alto didn’t use a microprocessor. Instead, it used a custom ALU composed of several TI 74181 chips. Here’s a look at the Alto’s basic specifications.

Try The Alto Yourself Today

Using only a web browser, you can try using vintage Xerox Alto software today without needing to download any special software. This feat comes thanks to an amazing emulator called ContrAltoJS created by the Living Computer Museum and ported to JavaScript by Washinton-based programmer Seth Morabito.

To get started, visit the ContrAltoJS website in any modern web browser (such as Chrome, Firefox, Safari, or Edge). Under the large rectangle (which represents the virtual Alto screen), use the drop-down menu to select a disk image. This is equivalent to inserting a disk cartridge into a real Alto.

For example, choose “games.dsk” to load a disk full of games. When you’re ready to start the emulator, click “Boot.”

When the emulator boots, place your mouse cursor over the emulator window to focus your mouse and keyboard input into the simulated Alto. You can type “?” to see a catalog of programs stored on the disk image, and you can generally just type the name of the file (and hit Enter) to run it. 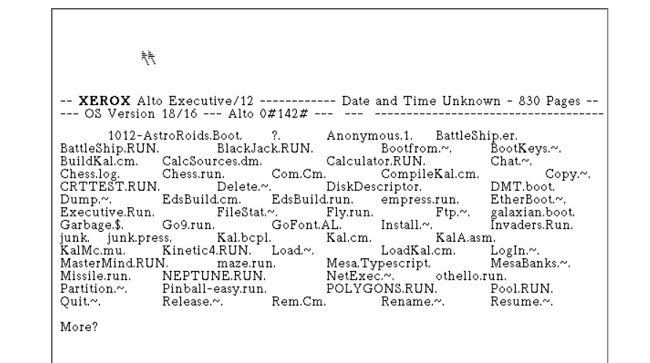 For example, to run Star Trek on the Games disk, type “trek” and hit Enter on the command line, and the game will load. There are dozens more games to try out, some developed in the 1980s. Morabito includes more instructions on the emulator page itself about how to load Smalltalk, for example.

RELATED: Why Are Video Game Emulators So Important?

While exploring Xerox Alto software, you might notice that Alto’s operating system (called “Alto Executive”) is not GUI-based. Instead, you need to type commands to use it. Also, the preferred Alto file manager, Neptune, is graphical and mouse-based, but lacks icons or any kind of spatial interface. There’s nary a folder to be found—what gives?

While much has been written about the influence of the Xerox Alto on Apple’s Lisa and Macintosh computer systems, the Alto didn’t originate the desktop file management metaphor—with icons, folders, and spatial file browsing that those Apple computers borrowed and extended upon. Instead, that honor goes to the Xerox Star 8010 Information System’s Viewpoint operating system, launched in 1981. While the Star was the first commercial GUI-based computer, it tends to get overlooked in the history books due to its relative failure in the marketplace.

(Interestingly the Neptune file manager looks more like the ones used in Microsoft Windows prior to Windows 95 than a Mac.)

Still, you can see that the development of the GUI wasn’t a one-time thing, but it took place in a continuum of innovation that’s still going today. Each step along the way (from the NLS, to Alto, to Star, Lisa, Mac, and beyond) added features and complexity. But without a doubt, the Alto was an essential step in getting to where we are today.

If you want to learn more about the Xerox Alto and its development at PARC, we highly recommend checking out the book Dealers of Lightning by Michael A. Hiltzik. For now, play around with the Alto emulator and try some of this legendary software for yourself. Have fun!

RELATED: Macintosh System 1: What Was Apple’s Mac OS 1.0 Like?

IPL Final 2021: How to Watch CSK vs KKR Match Livestream Online on Mobile, Desktop, and TV

IPL 2021 resumed recently after being on a hiatus for a few months owing to the second wave of COVID-19. The second leg...
Read more
How To

Elnur/ShutterstockThieves used audio deepfake technology to clone a businessman’s voice and order a $35 million transfer to foreign accounts, according to a court...
Read more