Kangana Ranaut is one of the most versatile actresses of the Bollywood film industry. Her film ‘Fashion’ garnered her positive response from audiences and critics alike. Having said that, the actress took to her social media handle to pen a heartwarming note recollecting happy memories winning her first National award for ‘Fashion’. The note read, ”First National award, Many special memories attached to this, I was one of the youngest actresses to receive the honour, also for a woman centric film from a woman President. 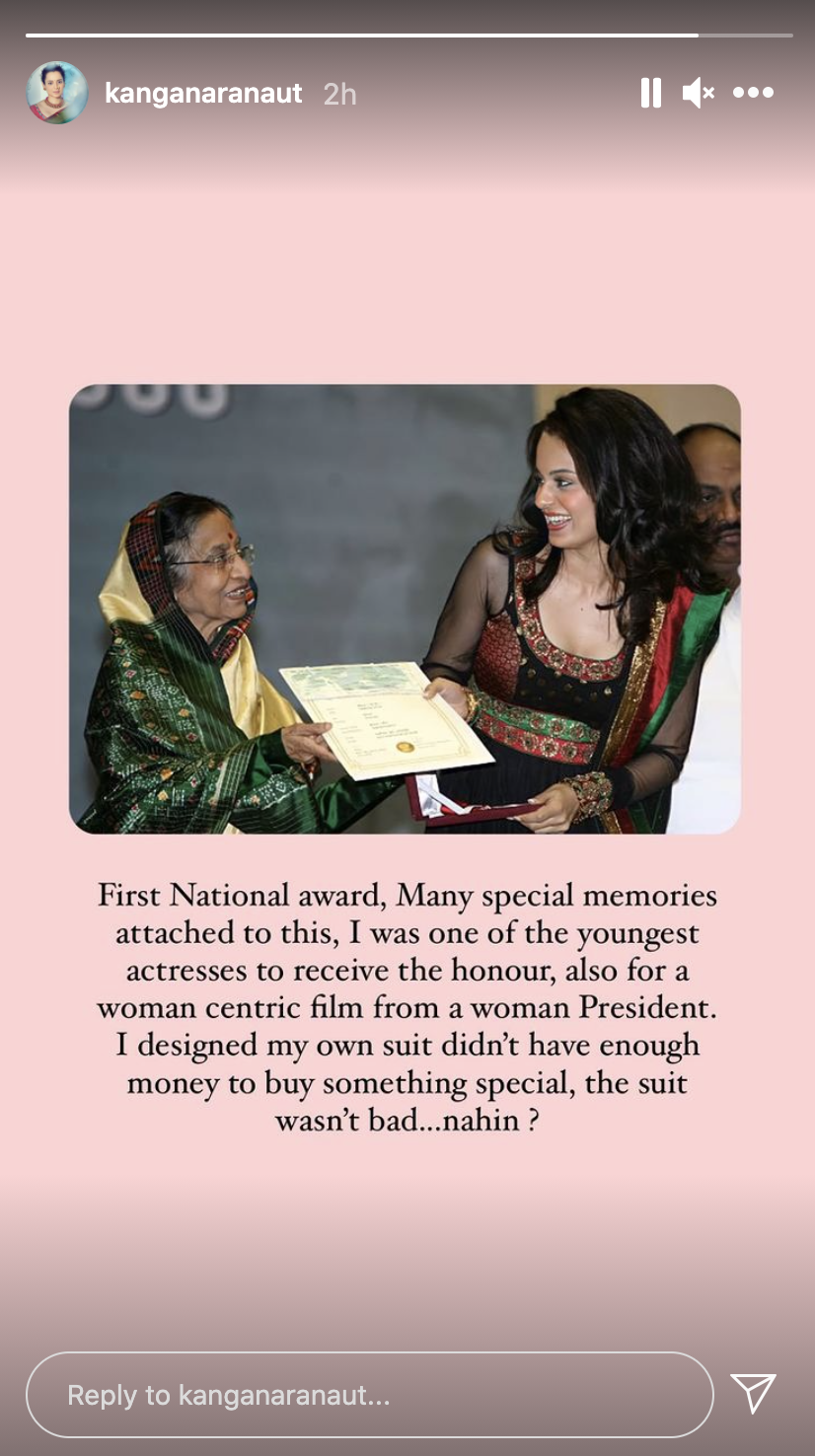 She also added, “I designed my own suit didn’t have enough money to buy something special, the suit wasn’t bad…nahin ?.” Helmed by Madhur Bhandarkar, ‘Fashion’ was one such movie which stays relevant till date, mirroring the reality of the glamour world.

Despite Kangana’s short screen time, her role in the movie etched in the hearts of every movie buff. During an exclusive chat with ETimes Madhur shared, the way Kangana absorbed the character and walked the ramp between action and cut, she is phenomenal, she goes to another level for her performance. She made a huge impact on the audience, even today people talk about her ramp walk.

On the work front, Kangana is currently preparing for her upcoming action entertainer ‘Dhaakad’ where she would be seen sharing screen space with Arjun Rampal. During an interview with a news portal, the actress revealed that her film ‘Dhaakad’ is to be based on child trafficking, crime against women. She also has ‘Tejas’ in her kitty where she will be portraying the role of an AirForce officer.

Share
Facebook
Twitter
Pinterest
WhatsApp
Linkedin
Email
Previous articleNeeva founder Sridhar Ramaswamy: ‘We guarantee that your data is used to serve you better results and for nothing else’
Next articleDrive File Stream renamed ‘Google Drive for desktop’

Historian Holland took to Twitter to “apologise”, but not for his earlier tweet on Modi, but to the makers of ‘Spider-Man’ “I’m a huge...
Read more
Entertainment

Harry Potter star Emma Watson has been missing from the spotlight for a while now. She isn't attached to any projects...
Read more

Well, looks like LG phone owners in the US are finally going to get a taste of Android 11. Yes, a majority of...
Read more
Entertainment

How Bitcoin's vast energy use could burst its bubble

Action-adventure game Sherlock Holmes: The Devil’s Daughter is selling at a 90% discount on Steam. The massive discount brings the game’s price down...
Read more
How To

Got an Old Tablet? Put It to Work in the Kitchen

Joe FedewaA lot of people have aging gadgets tucked away in a dusty drawer. One handy use that I’ve found for an old...
Read more
- Advertisement -