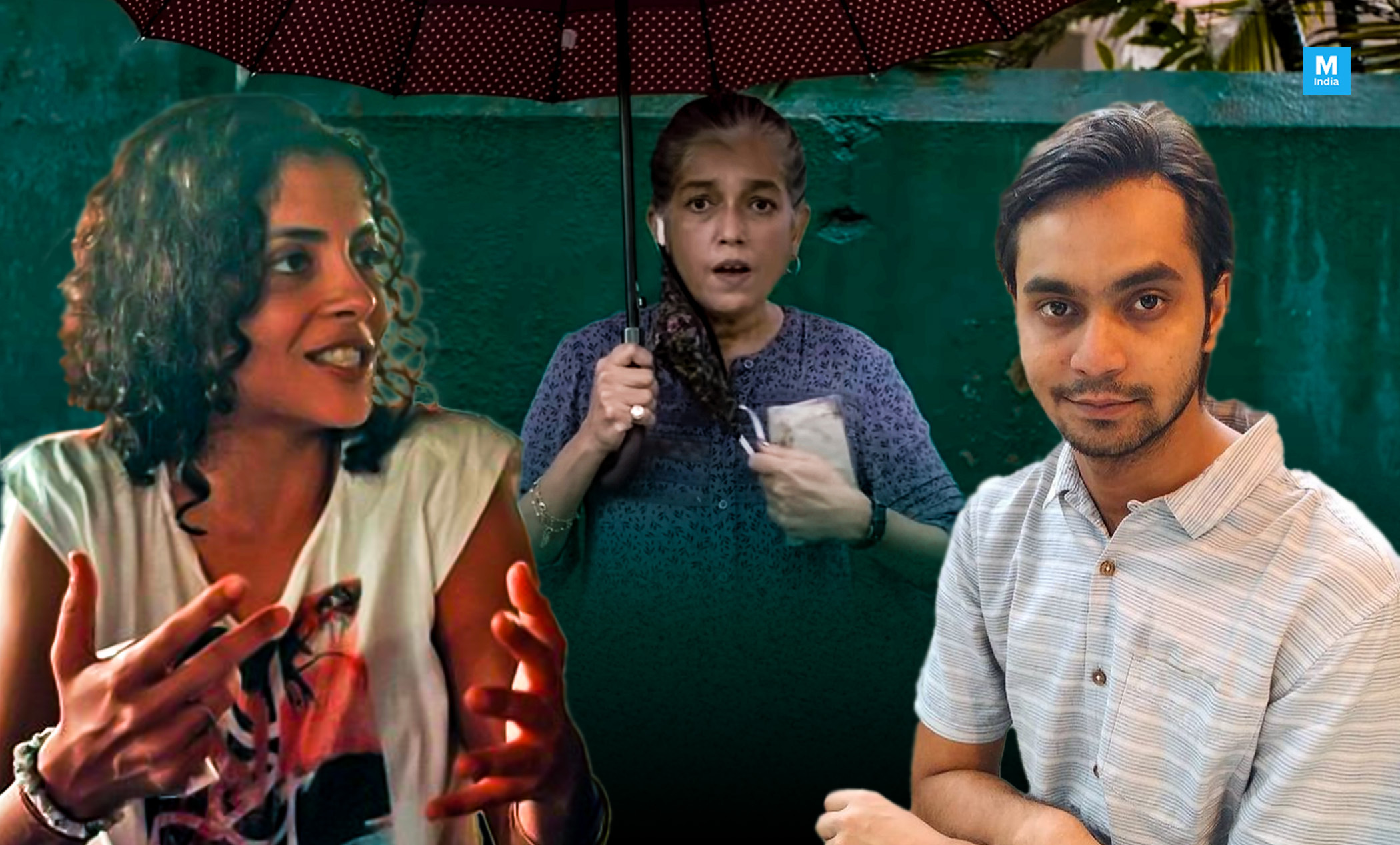 Amazon Prime Video India’s Unpaused is an anthology film made of shorts by directors Raj and DK, Nikkhil Advani, Tannishtha, Aviansh Arun, and Nitya Mehra, and features Ratna Pathak Shah, Shardul Bhardwaj, Abhishek Banerjee, Geetika Vidya Ohlyan, Rinku Rajguru, Lillete Dubey, Richa Chadha, Sumeet Vyas, and Ishwak Singh, that was conceptualised and shot during the COVID-19 lockdown. I was lucky enough to talk to Nitya and Shardul, who have worked together in the segment titled Chaand Mubarak, and why they zeroed in upon this story, how the world will look post this pandemic, and more.


Nitya, why did you choose to do Chaand Mubarak for Unpaused?

Nitya: “The genesis was of course Amazon and Pranati [Nagarsheth], my producer, calling me and saying let’s do an anthology, it’s about new beginnings, it’s about hope in these gloomy times with five directors. I did not have a story at the time. I think I kind of looked around my life at that time. I thought about insecurities with my biggest insecurity being going back on the set with a five-month-old baby. How do I do it without jeopardising my family by going to a set and shooting a film? And I narrowed that down to not being able to trust. Because in COVID times I thought that we as a society already had a lot of issues trusting one another and COVID is going to make that divide even stronger. And somewhere, I kind of wrote that on a board, brought in my writers, Tarun and Vidur, we spoke about what I was feeling, and we decided to do this very sweet, gentle, conversational film between two people set in a rickshaw and talk about perhaps learning to trust again.”

Shardul, how did you become a part of Chaand Mubarak?

Shardul: “As I got this story and we had spoken about it quite often, I and Nitya, is that yes, there’s this journey of new beginnings, and hope, which is there. But what resonated with me was the characters and who they are and where they come from and what happens in the film. And what happens in the film is also symptomatic of what is happening around us, which is like a direct result of what has been happening for a while. So, in a short film with a message about hope and a new beginning, it seemed like something worth doing.”

Nitya: “Also he was dying to get back to work.”

Shardul: “Exactly! Ya ya ya ya, I was dying to get back to work! [laughs]”

Did some of your real-life fears that were caused by the pandemic fuel the filmmaking process or did it hinder the process?

Nitya: “The thing is that since we were going to make lockdown films, we were all grabbing from our own experiences. So, there is this anxiety that is given to Ratna Pathak Shah’s character and we’ve all drawn from our personal experiences and tried to make it as real as possible. I think that pretty much came from me and Ratna, just noticing how the world has started behaving and being like ‘Oh god! I am sitting in a rickshaw. Oh god! This is going to be dirty’. So, I kept thinking about people who are already germophobes and what must be going through their minds during COVID and how it has made regular people who are not germophobes, germophobes. It is this fear psychosis. So, yes, there was a lot of taking from some people that I know and how they were behaving. In terms of hindering, I am a filmmaker and when I am on set, I want to make a film, COVID or no COVID. I am going to have serious press people talking to me about it. So, I better have something to show for it. So, for me, from the first shot onwards I was like Guys, we need to make a film and we’ve bloody two and a half days. So, get your act together. Wear your masks. All precautions are taken. But listen, there is a film to be made. So, very early on, the passion for making sure that you get your film right takes over.”

Shardul: “No, I don’t think it hinders. But ya, we at that point, the estimations that I had inside my head in August or for that matter in June or in July as to how this is going to pan out, people writing editorials for very respected newspapers about vaccines, health officials, everything gets proven wrong [laughs]. But I don’t think that the film is talking about any particular time of the COVID crisis. It’s a time, it’s a stasis, which we all have gone through.”

Nitya: “I think that if this film wasn’t shot during COVID times would still stand as is. Because what we’ve done with our society and the societal structures existed pre-pandemic as well. So yes, every now and then we face the paranoia of wearing masks and stuff like that, I think that this film will stand true in pre-pandemic and post-pandemic times because I don’t know how much learning would have happened.”

Chaand Mubarak deals with classism. Do you think this pandemic has aggravated these divisions or has it brought people together?

Shardul: “I mean, in any third world country which has been torn apart by the class divide getting deeper, add pandemic to it, what is going to happen? Even right now, we talk about medicines coming in and vaccines coming in and people are already planning their trips to London to get the vaccines first, I am not blaming them. But I am just saying that look at it. And look at it closely. This is what we are.”

Nitya: “I’d like to build on that. This class divide that we talk about, I hope that this pandemic has initiated an introspection. And I am sure that some people have changed their opinions. But I do believe that the fear psychosis has not helped in improving this class divide. I think that maybe it has made it a little stronger. I also think that how will it improve? COVID can’t do anything for it? When the migrant exodus happened, I mean, we all sat in our homes only? I mean some people did get out and help but the fear psychosis is working that ‘just sit at home only’. And that does break your heart.”

Do you think that the act of completing this pandemic related film was bittersweet? Because your characters get a conclusion but you’ve to come back and continue dealing with the pandemic?

Nitya: “I think that I am filmmaker because of that reason. I think I am a filmmaker because I think then I can tell a story and make my own endings. Be optimistic or pessimistic, the choice is mine. But that is the beauty of being able to tell stories. I find reality anyhow a little boring. I’ve always said that. Half my brain is always wanting to do sci-fi. I want to talk about another world. That’s the luxury or the advantage of being a filmmaker that you can have your own endings. But I also like to think that I would love to practice that in my personal life. I should be able to write my own endings. I should be able to, I don’t know. But I hope that I can work towards having a vision of where I want my life to be and how I want to read it.”

Shardul: “[shakes head] No, I am not envious at all. I mean, it’s a question worth thinking about. I haven’t thought about it [laughs].”

Well, the question that constantly bounces around in my mind and keeps me thinking that why did it take so long for these uberly talented individuals, Shardul and Nitya, to work together? It’s borderline criminal. I know, it seems like I am exaggerating. But once you see Chaand Mubarak in Unpaused, you’ll know what I am talking about. It’s some of the finest direction and acting that I have ever seen and I have seen their expertise in Made in Heaven and Eeb Allay Ooo! (Which BTW is available in theatres right now). All that said, I hope that they do collaborate again in the future and instead of a short film, it is the sci-fi movie that Mehra has in her mind with Shardul in the lead? Maybe. The possibilities are endless!

To fully vaccinate all adults by the end of this year, 8.84 million doses per day must be administered in the remaining days More...
Read more
Coronavirus

Data | Low-income countries have received only 0.27% of the COVID-19 doses administered so far

Due to wide disparity in vaccine supply, of the 52 countries in Africa, 38 have given at least one dose to Low-income countries...
Read more
Coronavirus

The retail inflation rate remained high at 6.26% in June 2021, above the RBI's upper limit for the second consecutive month. A sharp...
Read more